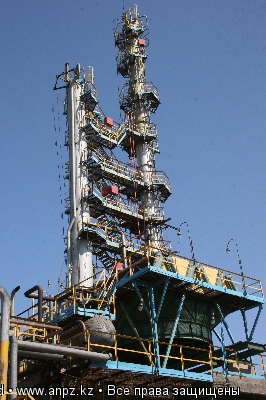 Catalytic reforming on the bimetallic catalysts R-86 (platforming) - is one of the most important processes in the refining industry.The process takes a leading position in the production of high-octane components of automotive, aviation gasoline.

The Unit LG-35-11 / 300-95, productivity on raw materials is 300.0 thousand  tons / year. It is operated by petrol option with production of high-octane component with Research Octane Numberup to 97 points. Installation was commissioned in December 1971.

The refinery was reconstructed to increase capacity up to 450 thousand  tons/year:

1 stage: In 1995, replacement of the catalyst AP-64 to bimetallic catalyst R-56, developed by the American company UOP.

2 stage: In 1997, the furnace P-101 of hydro treating unit was installed and put into operation, rebinding of the P-1 furnaceof cameras with reforming reactorswas made.

2) The replacement of internal devices reactors to "Skellopy."

3) Replacement of catalysts of the hydro treating and reforming to  S-120 and R-86.