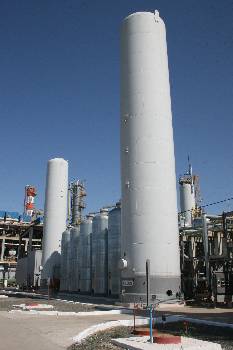 Project of hydrogen production and purification unit is developed by the “Axsia Howmar” by order of the "JGC CORPORATION” firm, Japan.

Date of commissioning – is the II quarter 2006.

For receiving  a product of high purity the system of adsorption with  variable pressure and motionless layer of the catalyst on technology of the “Axsia Howmar” company is used. Process is realized on the basis of repeating cycles with main stages of adsorption and regeneration.

PLC also carries out supervision over appropriate function of the block of short-term adsorption by pressure.

Control of technological process is exercised according to schemes, formed by distributing control system (DCS), including system of automatic control of productivity of the unit and control system of coefficient of fuel-air mix.

Systems, which are a part of management of the section of hydrogen purification, automatically regulate control settings of short-term adsorption by pressure at change of an expense of raw materials, and available system of antiemergency protection (AEP) carries out technological shutdown of the section of hydrogen purification at achievement of parameters of blocking settings.

Amount of received productional hydrogen after purification –is  11057 m3/h.

The section of generation (receiving) of hydrogen 78-Z-002 is intended for receiving synthetic gas (mix of crude gaseous hydrogen) from gas mix (oil gas, hydrogen) by a catalytic steam reforming, and it also includes following processes:

Gross productivity of the unit of hydrogen purification and production is 16672 m3 / h of purified high purity hydrogen (99.9%).