Book “The Firstborn of oil refining in Kazakhstan” part I, Zh.Esenov 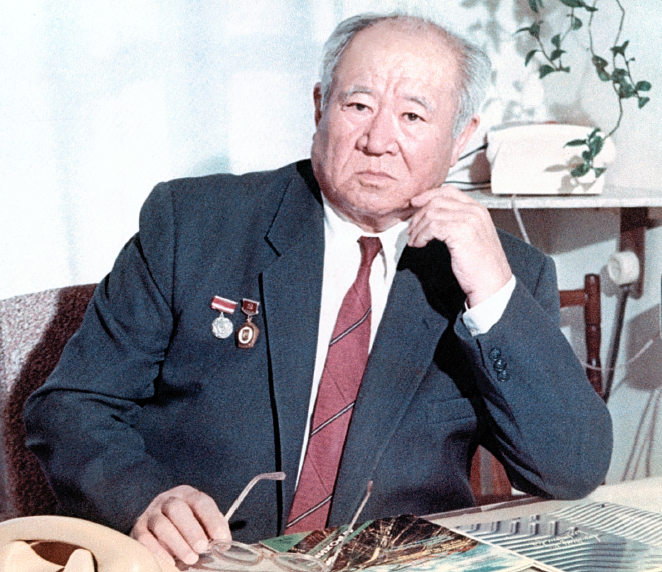 Esenov Zholaman Esenovich was born on April 14, 1923 in Tendik-uzek of the Balykshinskiy district of the Guryev (now Atyrau) region. He graduated from the Guryev teacher training college before The Great Patriotic War and worked as a teacher at school. During the war, he graduated from the Guryev military infantry school and then he fought in the operating military units in the cities Balashov and Kalach at Stalingrad. He was demobilized from the army in November 1945.

In January 1946 Esenov Zh.E. was adopted at the refinery №441 as a norm setter, then as an economist on labor. He graduated from the Moscow Institute of Oil and Gas named after Gubkin. He was nominated as the head of the labor department, he headed united department on labor and on work with staff. 33 years he headed the economic and human resources services of the Guryev (Atyrau) refinery.

He was well known as a highly qualified economist and lecturer, constantly acting on the different economic seminars and symposiums. In the evening, he taught in the branch of the Higher Party School of the Central Committee of Communist Party of Kazakhstan, the  University of Marxism-Leninism.

Esenov Zh.E. - The only specialist in the history of the refinery, he was awarded two honorary titles: "Honory Economist of the Kazakh SSR" and "Honorary petrochemist of the USSR."

For military and labor merits he was awarded the Orders of "Patriotic War of II degree" and "Badge of Honor" and medals. He was an outstanding figure of economy, an excellent organizer and humane person.

Esenov Zh.E. is the author of "The firstborn of oil refining in Kazakhstan", which became the matter of his life. One of the main advantages of this book - is the author's careful attitude to the historical facts, the biographies of people, of which he spoke with deep gratitude and respect.

The book "Firstborn of oil refining in Kazakhstan" – is a tribute to the memory of those who stood at the origins, a kind of word of greeting to workers today, parting wishes to the young generation of the   refinery workers.

Seniority of author of the book- Zholaman Esenov totaled 45 years, and he was a party of the majority of events, that occurred during this period.

The first part of the book "The firstborn of oil refining" covers the period from 1943 to 1995 of activity of the Atyrau refinery, previously refinery № 441, Guryev refinery named after Lenin. The value of this book lies in the fact that the book reflects the historical events of the distant 40s, career of the first builders of the refinery and the first refiners in Kazakhstan. It is consistently reflected the stages of development of the flagship of the Caspian. The memories of veterans were published in the book. Materials are authentic and have a great historical significance. The book is intended for a wide audience.

Book "The Firstborn of oil refining in Kazakhstan", part I, Zh.Esenov